Merry Christmas!
(If you don't know the TRUE meaning of Christmas, just listen to Linus....)
Posted by Brian Baker at 5:14 PM No comments:

This image is funny, but the situation it parodies (Rob Bell's falling away from orthodox Christian doctrine) is very sad indeed... 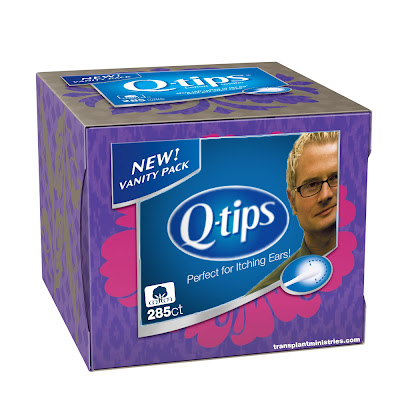 Posted by Brian Baker at 7:10 PM No comments:

This is kinda fruity, but I thought it was funny. Sad thing is, I remember most of this stuff. Ah, memories...

Posted by Brian Baker at 6:37 PM No comments:

The Humility of Christ

Check out this absolutely amazing (and biblical) Christian hip-hop song by Timothy Brindle, called "The Humility of Christ". Not only are the rhymes incredible, but he does a great job of capturing the multitude of ways Christ was required to humble himself, in order to come to earth as a man and save us from our sins. Praise Him!


"How can one man, in a matter of hours, drain the cup of God's wrath, that would have taken an eternity to pour out on me? How can that be?"

Forever, before the creation, or there was Satan
The Son was with the Spirit and Father in glorification
Before worship, or fine angels above
The Trinity was in the perfect triangle of love.
Chilled with no-one else, no need for others
'Cause God is self-sufficient, fulfilled within himself.
And we can only guess the conversation,
But the Son agreed to rescue those the Father gave Him.
And although this Lord should be worshiped
He volunteered to take upon the form of a Servant
The Father commanded yet asked Him to come
So now let's examine the fashion it was done...
Let me ask you if you seem confused with this:
God passed through His own creature's uterus.
I admit this is odd, yet the Bible can persuade me:
An omnipotent God, crying as a baby?
No doctors around, no spot could be found
To give birth to a child, the only option in town
Was to be born in a feeding trough with breeding cows
And feces piles, the scene was foul
It wasn't fancy but raunchy
How the Son of God was born next to camels and donkeys
What an awesome feat, to drop so deep
And cop His sheep, He then stepped down
He took a quantum leap.
And I'm amazed how God, infinite in wealth,
Put aside His fame and limited himself
To time and space with eyes and legs
He died to save a violent race
Whose sin would bring Him hell.

The promised Messiah didn't come in the honor of sire
But humbly rockin' some modest attire
So people missed it, to be specific
The legalistic thought the King would be the richest
And we know we like commodities
But the possessor of all riches chose a life of poverty.
Wait, it's not the descendant of David, is this?
Yes, and He's descended the greatest distance
He chilled with sinners and tax robbers
Amongst His creatures who, to Him, were grasshoppers
He dwelt with the lower class, lowly men
And those known as trash were His chosen kin
And the unbelieving Jews were sick of Him
They said, "He runs with a team of stupid fishermen,
And speaks to Samaritans and barbarians."
Pharisees stared at Him with harsh arrogance
Its shown when the Savior took notice of beggars,
Healed the blind and sick, and those with lowest of wages
He even touched those with leprosy
Which was seen as the most disgusting known infection, see?
Wait, are you kidding me?
Watch Jesus go low and wash Peter's toes, what great humility!
See the second person of the Trinity
Came down to rescue workers of iniquity
Check His earthly ministry, He didn't make a bed
He had no place to lay His head.
But He became bound to His own law, but we found no flaw
Was from a rugged town, so wrong!
Slumbered and slept, hungered and wept and sweated
Plunged to our depth, and some of our depth's pathetic.
The humblest yet, the humblest death that's dreaded
The Son is our rest, come under Him, get His credit.

He was falsely condemned by Jews and filthy pagans
Now the cross, the peak of His humiliation
No discussion, sure they'd best remove Him
He got the most disgusting form of execution.
He who sits upon the throne and rules
Was kicked and stomped and spit upon by Roman fools
Despised by Israel, tried by simple souls
But was silent when struck by violent imbeciles
And Jesus was able to call down legions of angels
But He was too faithful
Gracious and patient was Him,
Yet he was hated and forsaken by men.
Like Jews they hated his soul, Judas betrayed Him for gold
When it was tough his crew was afraid so they rolled
Suckers, they murked Him, the suffering servant
Was beat up and looked like He was cut by a surgeon
Slaughtered, bleeding, gushing, oozing blood
The Father pleased to crush Him whom He loved
So He probably didn't even feel the crown and nails
He had to suffer more than that to bring down the veil
Our eyes are haughty and our lies are naughty
The Holy Christ bore our sins inside His body
Yeah, his veins they burst, but no one's pain was worse
'Cause the One who made the earth became a curse
And He was one with the Father's essence
But on the cross the God of heaven's cut off His presence
So I can't share any language
That can rightly describe the Christ's despair and his anguish
So forever will I tell,
In three hours Christ suffered more than any sinner ever will in hell
He who had infinite joy and pleasure
Became a Man of Sorrows so we can join forever.

He took a cosmic plunge, put on some lungs,
On the cross became to God a sponge
To soak up His wrath
So the wicked wouldn't be sifted and blown into chaff...
Posted by Brian Baker at 5:35 PM No comments:

Zach, Sarah, and I had a wonderful ski weekend at Cataloochee (near Maggie Valley NC, Megan's old stomping ground). Unfortunately, Cathy was feeling sick just before and was not able to go.

But other than that, we had a wonderful time, and both Zach and Sarah did very well with their "ski skills". Sarah, who had only been skiing once, got bored with the "bunny slope" after about ten minutes, and spent the rest of the weekend cruising down the main slopes like a pro.

Here are some videos (sorry that two of them are portrait instead of landscape...):

Posted by Brian Baker at 6:56 PM No comments:

Fun in the Snow

Cathy and I had some serious fun yesterday involving Zach, Sarah, sleds, and a snowy hill at the park... Enjoy.

While today's snowstorm wasn't the historic event that was predicted, it was a great snow nonetheless. Cathy and I measured between five and six inches of snow, but it seemed like more.

One of my favorite historic photographs of Simpsonville was taken on a similar snowy day, probably sometime before World War II. It is a photo of folks (grownups!) playing in the snow in front of the old Simpsonville train depot. Unlike many old photos, this one captures a brief moment of fun back in the days when times were tougher, and there were fewer moments available for play.

These days, that same Simpsonville train depot is a thriving ice cream shop, one which owes no small part of its success to our family's patronage! And today, myself and three other grownups (you know who you are!) definitely took some time to act like kids and have fun playing in the snow. As they say, the more things change, the more they stay the same.

In any case, here's a couple photos of the same snowy scene, separated only by time... 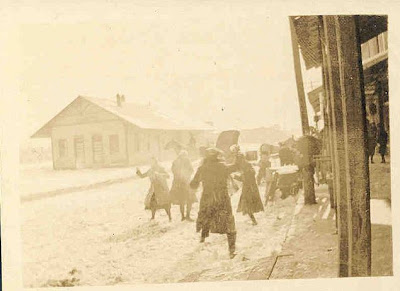 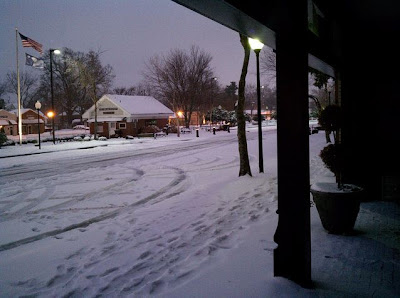 Posted by Brian Baker at 3:10 PM No comments: